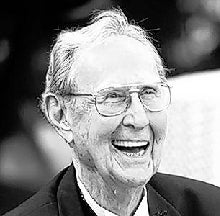 William Daniel "Dan" Barker Jr., who served as chair of the AHA Board of Trustees in 1979 and in various leadership roles over six decades with Emory University Health System, died on his 96th birthday July 21 at his home in Atlanta. Before retiring in 1990, Barker served as administrator for Crawford W. Long Hospital, executive director of Emory University Hospital, director of Hospitals for The Robert W. Woodruff Health Sciences Center and a clinical professor of community health. He also was a past chair of the Georgia Hospital Association, which named its annual award for outstanding leadership after him; and received the AHA Distinguished Service Award for his significant lifetime contributions to the health care field.