Earlier this month, my colleague Tom Nickels, the AHA’s executive vice president, released a blog post that pointed out numerous flaws in a recent Health Affairs study on hospital and physician prices between 2007 and 2014. We asked the respected economics consulting firm Charles River Associates to take an even closer at why the study’s findings are flawed. Not surprisingly, they concluded it has little if any probative value. Here’s what they found.

To reiterate, the authors use data sources that represent at best 30 percent of the health insurance market to make sweeping conclusions about hospital prices, and none of the data include Blue Cross and Blue Shield plans, which dominate nearly every state insurance market. That flaw alone renders the study unreliable.

Despite the dearth of data, the study boldly claims hospital price increases were the result of hospitals exercising market power and lack of adequate antitrust enforcement. There are at least two problems with that conclusion. First, if it were valid, it would describe a hospital field replete with supracompetitive profits. Yet, approximately 3 in 10 hospitals between 2007 and 2014 had a negative operating margin, and those with a positive operating margin did not increase during this time period; so much for correlation. 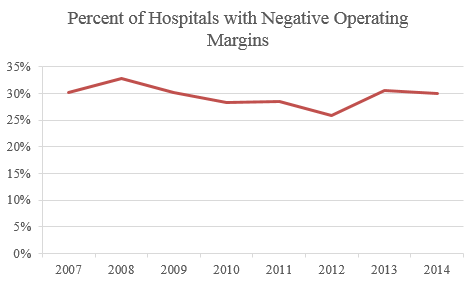 Second, the period covered by the study was characterized by robust antitrust enforcement of hospital mergers. Between 2007 and 2014, antitrust agencies largely successfully challenged nine hospital mergers and undoubtedly rejected many more that were never taken to trial.

Those aren’t the only flaws in the study. Among the others is that the authors fail to account for the fact that costs borne by hospitals and health systems have also increased substantially, with hospital expenses per adjusted admission increasing by 3.6 percent annually during the time period studied (which is very similar to the compound annual growth rate in hospital operating revenue of 3.9 percent). These costs include the dramatic and continuous price increases for drugs, which are paid for by hospitals but not by physicians. For example, between 2013 and 2015, the average drug spending per inpatient admission for hospitals increased a staggering 38.7 percent. 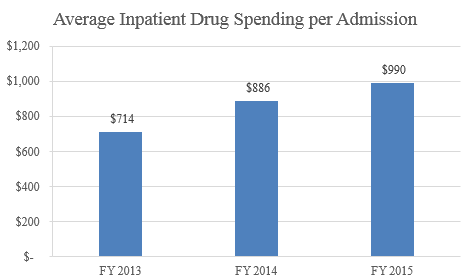 In addition, as costs have increased for hospitals, the percentage of total patient volume from Medicare and Medicaid also increased, from 58 percent to 64 percent. This is a critically important factor the authors neglected to consider since these two government programs cover less than the full cost of care, approximately 86 percent to 90 percent between 2007 and 2014. As a result, annual shortfalls from government payors increased by 72 percent during this time period to more than $50 billion. 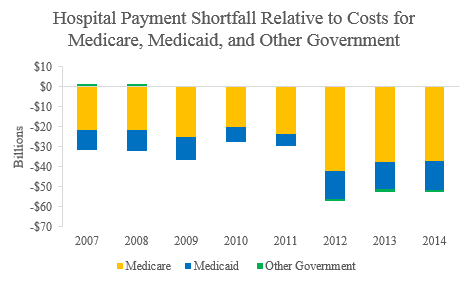 The fact is that simply observing a difference in the overall trends of prices in two different markets, as the study does, does not provide a basis to make inferences about the relative bargaining leverage or market power in any market.

In summary, this is another disappointing study given more credence than it deserves.