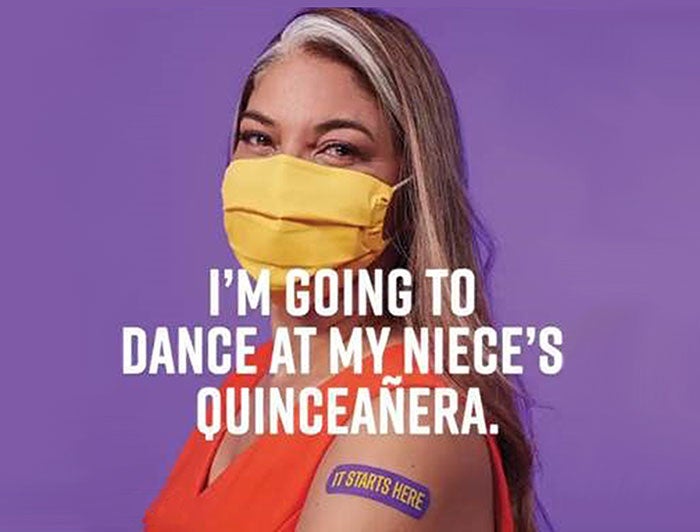 In March 2021, Trinity Health, a large health system based in Livonia, Mich., that serves communities across 22 states, launched the It Starts Here campaign, an educational initiative focused on getting communities of color vaccinated. The campaign included $1.1 million in grant funding to local community-based organizations as part of efforts to reach other vulnerable communities, including older adults, people experiencing homelessness and residents in rural areas. Trinity spent an additional $500,000 on marketing and communication efforts, including running social media and radio advertisements, reaching influencers, and creating digital and physical marketing assets.

Trinity Health’s campaign goals were threefold: to build trust in COVID-19 vaccines and in the health system’s capacities to administer the vaccine; to educate the public and raise awareness; and to make the vaccine more accessible to communities of color.

After identifying the health inequities that exist among communities of color and other vulnerable communities, Trinity kicked off its media campaign in March 2021, after selecting social media influencers to help spread the word that COVID-19 vaccines are safe and effective.

To achieve success in the campaign, Trinity partnered with community and faith-based organizations to best interact with the target populations. Weeks before the media campaign went live, Trinity distributed $1.1 million in community health and well-being grants to support local, community-based organizations, affiliates and projects. That funding helped create excitement around the campaign.

The media campaign included working with more traditional media partners as well as Black and Brown social media influencers with large followings in 14 underserved communities across the country to educate, raise awareness and promote the availability of the COVID-19 vaccine.

The Centers for Disease Control and Prevention reports that Blacks are 1.1 times more likely to be infected by the coronavirus and 2.9 times more likely to be hospitalized, compared to whites. Meanwhile, Hispanics and Latinos have a 1.3 times higher risk for infection and a 3.1 higher hospitalization rate, while Native American communities are at the highest risk. In addition, the CDC reports that of the COVID-19 vaccines distributed during the first month they were available, only 5.4% of Black Americans got the vaccine compared to 60% of white Americans.

The program is well underway, and Trinity Health is tracking upstream and downstream metrics for the campaign. Because mass vaccination efforts are unique, Trinity crafted specific definitions of success, including the number of people vaccinated, number of people engaged and number of educational events.