The Department of Health and Human Services (HHS) and the Health Resources and Services Administration (HRSA) Nov. 29 issued a new proposed rule revising the 2020 final rule that established the 340B Administrative Dispute Resolution (ADR) process. HHS notes that the proposed rule better aligns with the statutory requirements for the ADR process that was first put in place by the Affordable Care Act (ACA). Public comments will be accepted through Monday, Jan. 30, 2023.

The rule specifically proposes to:

The proposed rule notes that any dispute between 340B covered entities and drug manufacturers that are subject to federal court review would not be eligible for the ADR process until the court process concludes.

The Administration’s ADR process proposal for the 340B Drug Pricing Program is an important step in ensuring the integrity of the 340B Program. While we are reviewing the proposal in more detail, we are encouraged that the Administration has proposed changes that would make the process more accessible for 340B providers seeking dispute resolutions. We plan to submit comments to further improve the final rule and to ensure that the ADR process is effective. In addition, we continue to urge the Department of Health and Human Services to aggressively use all tools available to stop the harmful tactics of drug companies that violate the law and diminish 340B hospitals’ ability to deliver care as Congress intended.

Highlights of the Proposed Rule

The following is a summary of the key proposed changes.

Revised Role and Structure of the ADR Panel

The proposed rule envisions that the role of the ADR panel would be to independently review and apply 340B law and policy to specific circumstances of potential overcharges, diversions or duplicate discounts. The rule further proposes that the panel members be 340B subject matter experts with specific knowledge of the authorizing statute and the operational processes of the 340B Program including covered entity registration and program integrity efforts such as audits. These proposed changes are consistent with the Administration’s effort to move away from a trial-like process to a more administrative process that requires specific operational knowledge of the 340B program. Specifically, the rule proposes that the HHS Secretary appoint a roster of eligible individuals consisting of staff from HRSA’s Office of Pharmacy Affairs (OPA) that manage the 340B Program to serve on the 340B ADR panel. The ADR roster would include no less than 10 staff from OPA. HHS is soliciting specific comments on the proposed size and composition of the 340B ADR Panel, including the proposal to maintain the 340B ADR Panel within OPA or whether staff from other areas HRSA or HHS more generally should serve as members of the panel.

HRSA’s longstanding policy has encouraged 340B covered entities and drug manufacturers to work in good faith to resolve disputes. The proposed rule emphasizes the importance of engaging in good faith resolution efforts prior to filing an ADR claim. As a matter of statute, drug manufacturers can challenge covered entities only pertaining to issues of diversion and duplicate discounts but must first conduct an audit of the covered entity’s violation of the 340B statutory prohibitions on diversion and duplicate discounts prior to filing an ADR claim. As such, the rule proposes to limit the ADR claims to those provisions set forth in statute on overcharging, diversion and duplicate discounts. The proposed rule also would require that the ADR panel suspend its review of any claims that involve issues pending adjudication in Federal court. The ADR review could continue once the issue is no longer pending in Federal court.

More specifically the rule proposes that, in cases where the drug manufacturer is accused of overcharging a covered entity, the 340B covered entity must submit documentation that OPA staff could review for accuracy for the claims to be eligible for the ADR process. Such required documentation could include the following:

HHS and HRSA request comment on the feasibility of covered entities to produce the required documentation listed above. In addition, they seek comment on what other types of documentation would indicate good faith effort and whether a threshold for attempts at communication should be established.

What You Can Do 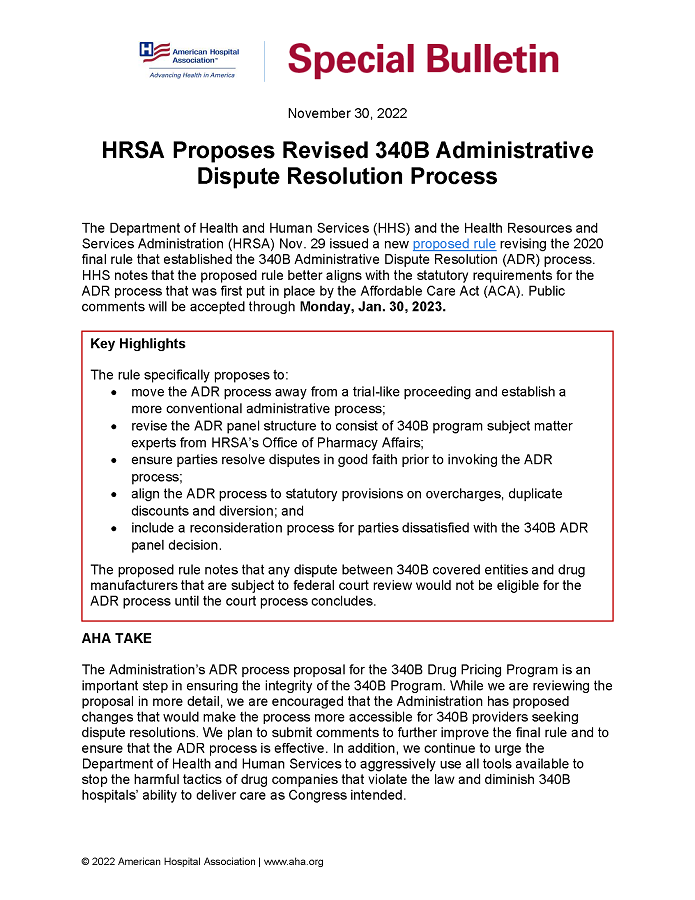