It sounds almost too good to be true: a smartphone app that alerts behavioral health patients when an emotional crisis seems imminent — a fire alarm of sorts. But that’s how California-based Mindstrong Health has billed its digital tool. The company, along with its partner 7 Cups, a digital behavioral health network, now are piloting it.

The New York Times reports that Mindstrong has been working for the past year with public health officials from 13 counties and two cities in California as well as patient representatives to test smartphone apps.

Early users — only a few dozen in all and most of whom have been diagnosed with borderline personality disorder — received treatment through the Los Angeles County mental health network. The report notes that the patients allowed Mindstrong to digitally install an alternate keyboard on their smartphones, embedded in the app, and to monitor their moment-to-moment screen activity.

A report last fall in MIT Technology Review noted that Mindstrong’s research shows that seemingly small details like how people interact with their phones offer important clues about their behavioral health. With details taken from the app, a patient’s doctor or other care manager can be alerted. The caregiver can then check in with the patient by sending a message through the app.

Will the app deliver on its promise? It may take a couple of years to find out, Thomas R. Insel, M.D., one of Mindstrong’s co-founders and a former director of the National Institute of Mental Health, told the Times. He notes that the program had a somewhat rough beginning. One challenge centered around only notifying the app’s user when there is a real potential for crisis and not a false alarm. Also, about half the early users stopped using the keyboard function either because they had trouble adapting or lost interest. 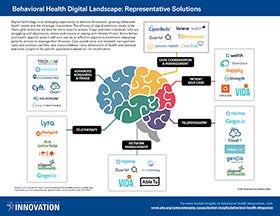 But as innovative as this approach may appear, it will face complicated issues associated with patient privacy. Patients may fear the thought of these data being collected and who might see them, particularly if there were a security breach. Likewise, an app developer would likely need extensive data on thousands of users to begin to adapt its product to the many forms of disorders and their respective manifestations.

For more on the behavioral health digital landscape and some of the many solutions to screen, triage and treat individuals who are struggling with depression, stress and anxiety or coping with chronic illness, download this AHA Market Insights infographic.