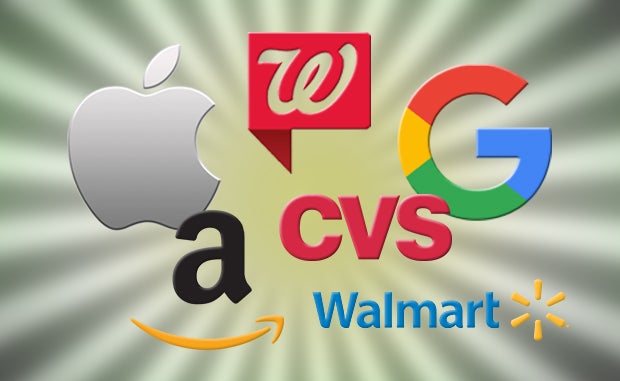 If 2021 will be remembered as the great expansion of retail health care, 2022 is likely to be defined as the year of disruptor differentiation. The massive push by CVS Health, Walgreens, Amazon and Walmart to scale primary care services — in person, virtually and in some cases at home — rapidly took shape last year.

Embracing omnichannel strategies to meet more of consumers’ health needs and working to further personalize care delivery among populations became key focus areas for these retail giants. But as they’ve long heard from their counterparts in hospitals and health systems, retailers still face challenges in areas like data sharing and interoperability, forging stronger ties with payers and employers, and meeting patients’ expectations in provider relationships.

Meanwhile, tech giants like Apple and Google spent much of last year reshaping their health care strategies and trying to redefine their value to the field. So, what lies ahead? Here’s what we know.

With plans to bring its Amazon Care telemedicine and in-person primary care to 20 major cities by the end of this year, the company reportedly has talked with several large payers, including Aetna, Premera Blue Cross and Blue Cross Blue Shield of Massachusetts, in an effort to expand coverage of its services. If deals are worked out, this would allow insured patients to use Amazon Care as they would any in-network provider. Amazon Care already is offered to Amazon’s employees in all 50 states.

Amazon’s differentiation strategy includes connecting users with a clinician via chat or videoconferencing within 60 seconds. When in-person visits are required, Amazon Care plans to send a mobile clinic to the patient’s door within an hour and deliver medications within two hours. Amazon also plans to leverage its Echo smart speaker system and Alexa artificial intelligence-powered virtual assistant to engage consumers regarding their health needs.

The mammoth tech company spent much of last year exploring ways to further build out the power of its personal health tools, while also considering a primary care service for its employees focused on integrating data collected by devices like Apple Watch with clinical care.

Apple trialed the planned service by taking over an employee health clinic as a test site. If the company can prove that the combination of monitoring devices and health services can improve health, it would offer the model to other organizations as a subscription-based program, according to a Wall Street Journal report.

The retail pharmacy giant continues to double down on delivering a single integrated experience that connects consumers to a CVS care team, virtually and face to face at its 650 HealthHUBs. The company in December stated that it expects to increase its revenues to $304 billion this year — a nearly $15 billion increase from 2021.

Much of this growth is expected to come from increasing primary care capabilities as it guides consumers across the care continuum to sites and providers that meet their needs. Company leaders also have expressed a willingness to use risk-based arrangements and value-based care. To support its increased focus on providing health services, the company announced it will close about 900 stores over the next three years. CVS also plans to launch new all-payer products and services to diversify its portfolio with new employer, consumer and health plan solutions. This will include expanding home health services, creating health-related subscription models for broader populations, and the commercialization of analytics and insights, notes a Healthcare Finance report.

Coming off a year of tremendous upheaval in its health care business, Google once again is redefining its strategy. In August, the tech behemoth dissolved its Google Health business, the same month that former Geisinger Health CEO David Feinberg left the company after just two years to become president of Cerner.

Karen DeSalvo, chief health officer for Google who replaced Feinberg, vowed that the company was not retreating from health care but shifting its focus to embed health care research and approaches in its core products like YouTube rather than creating new commercial services. DeSalvo told CNBC in October that Google will focus on three areas of health care where it believes it can make a difference to users and their communities: through its search capabilities, access to cloud tools for caregivers and providing community context around social factors affecting health.

After spending all of 2021 refocusing its health care strategy and making major investments to bring primary care services to many of its retail outlets, Walgreens will begin learning this year whether its bets will pay off. The company’s $5.5 billion investment to become majority owner of primary care provider VillageMD and CareCentrix, which develops programs to improve quality and lower costs by caring for patients at home, are central to Walgreens’ future.

Currently, Walgreens has 52 VillageMD primary care clinics located adjacent to its stores and plans to have 1,000 by 2027. The company also has opened 40 Health Corner locations within its stores that give consumers access to pharmacists, nurses and dietitians who can assist them with their health needs. The move is an apparent response to the growth of CVS Health’s HealthHUBs. It bears watching whether Walgreens can meet its aggressive growth plans as it continues to execute its revamped strategy.

Amazon, CVS Health and Walgreens may have generated more headlines for their health care moves in 2021, but Walmart steadily increased its already expansive reach. In May, the huge retailer with more than 5,000 stores nationwide said it would acquire telehealth provider MeMD. This will allow Walmart to provide access to virtual care nationally, including urgent, behavioral health and primary care, complementing its in-person Walmart Health centers.

The company also further expanded its discount pharmacy program by launching its first private brand ReliOn analog insulin. The products will save customers 58% to 75% off the cash prices of analog insulin vials and FlexPens. Elsewhere, through a partnership with Transcarent, Walmart began offering its savings on pharmaceuticals and other services to self-insured employers for the first time. The offerings provide access to pharmacy, optical, telehealth, over-the-counter treatments, Walmart Health centers and low-cost fresh food savings.