Keeping staff safe from aggressive patients and visitors is top of mind at Louisville, Ky.- based Norton Children’s Hospital.

When behavioral health admissions and visitor aggression increased, all staff, including physicians and security officers, were trained on verbal de- escalation strategies. A core group of individuals were also educated on nonviolent crisis intervention.

Leaders minimized possible entry points, stationed security officers at locations that remained open and screened visitors more thoroughly. They also posted a pledge in all care areas to promote an environment of mutual respect and belonging. More security officers were hired, and rounding increased throughout the hospital, outdoor campus and garages.

Security officers underwent additional training and are now armed and educated to safely use Tasers, which has helped them to de-escalate certain incidents. For example, when a patient recently charged at a staff member with a knife, a security officer deployed a Taser on the patient to safely stop the attack.

“This allowed us to take the knife for safekeeping, get the patient to a safer environment, and prevent any harm from occurring to our staff,” said Erik Martin, vice president and chief nursing officer at Norton Children’s Hospital.

Norton leaders have also strengthened their relationship with the local police department and now staff their emergency department 24 hours a day, seven days a week with an off-duty police officer.

“Our emergency department staff will tell you that they are confronted with fewer instances of patients or parents acting out and experience less episodes of disrespect,” Martin said. “The mere presence of a police officer has created an atmosphere where communication is more respectful. When tension is rising or voices are escalating, the police officer rounds through the area and their presences alone can often deter things without any additional intervention.” 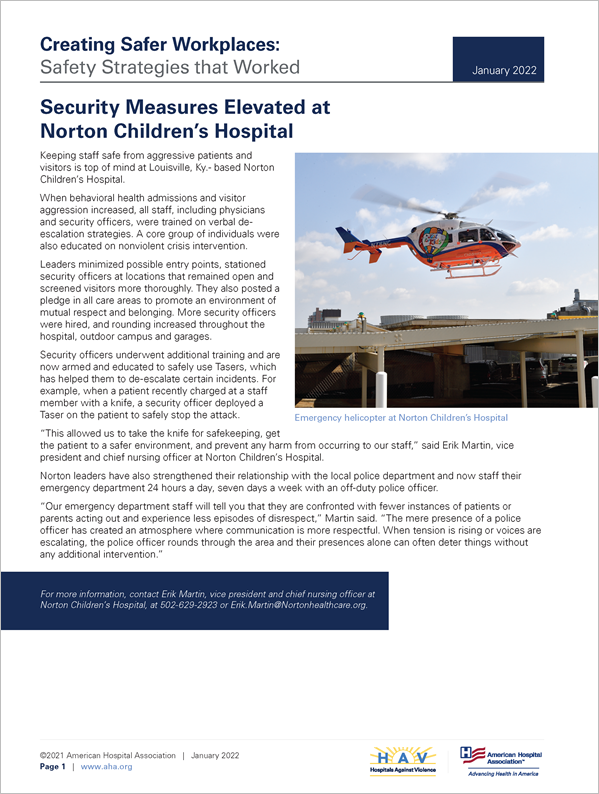