Kimberly Williams is no stranger to human trafficking. She learned the hard realities of its victims nearly a decade ago while living in Charlotte, N.C., after attending a conference on the subject through her church.

“I thought, ‘I can’t believe this is happening.’ As an African American, and given the history of slavery in our country, it alarmed me,” says Williams, project coordinator in spiritual care at Baylor St. Luke’s Medical Center in Houston.

Compelled to do something to help, Williams went on to raise funds, and she and her husband opened their home to sex-trafficking victims in the Charlotte area. Williams’ passion for her work has continued in her new role at Baylor St. Luke’s.

“The previous director of my department had applied for and received a small grant from Catholic Health Initiatives (CHI) to raise awareness in our hospital about human trafficking. I was brought on board to continue raising awareness and to broaden the scope of the effort,” Williams recalls.

After conducting one of her first human trafficking training sessions, Williams was told of a pregnant teenager who came to the emergency department (ED) with her other young children. There was suspicion the teenager was a sex trafficking victim.

“Texas Children’s Hospital is just across the hall from us — and we asked, ‘How do we talk across the hall about this minor who we believe may be a victim,’” Williams says.

“We found that [some of] our patients who were hospitalized for psychiatric conditions had a comorbid history of human trafficking or were currently being trafficked. We turned to peer-reviewed medical literature for guidance and found few recommendations,” Gordon says.

Discussions among consortium members revealed that the participating organizations often lacked the resources and formal policies to effectively identify, treat and maintain post-treatment follow-up with human-trafficking victims. The consortium now is working to address these issues while continually raising awareness about human trafficking across all areas of their institutions.

Melissa Graham, a board-certified RN at Houston Methodist Hospital, dug in to work with colleagues at her hospital to explore how to respond to the needs of trafficking victims. She’s logged many hours in working across the organization along with colleagues Kimberley M. Dubose, operations manager of emergency services, and Johnie Leonard, nursing director of emergency services, to draft a formal human trafficking policy. They have engaged clinical committees, the legal department, nurses’ council and others to develop the policy that eventually will go to President and CEO Marc L. Boom, M.D., who has been a strong supporter of their efforts.

Graham knows all too well the pain associated with sex-trafficking victims. Her 18-year-old niece was trafficked after meeting online a man who later kidnapped her from her Indiana home and took her to Oregon, where she and other young women were exploited. The FBI later rescued Graham’s niece, giving her a second chance — something many trafficking victims don’t get.

“She was missing for about six months,” Graham says. “The FBI was able to track her because her captors made the mistake of letting her keep the cellphone that her mother had bought her.”

In a letter to Houston Methodist staff in July, Boom shared Graham’s story, along with a copy of the policy draft she developed to solicit feedback and underscored the significance of human trafficking globally and in Houston. According to a recent University of Texas study he wrote, there are as many as 313,000 human-trafficking victims in Texas. Like Graham, Boom believes hospitals can play a crucial role in combating human trafficking.

“As health care professionals, we have the opportunity to play a crucial role in assisting potential victims,” Boom wrote. “It’s likely that potential trafficking victims visit our hospitals, EDs or Emergency Care Centers on a daily basis. We must be ready to help them.”

A white paper published in July by Washington, D.C.-based Polaris, a nonprofit organization dedicated to preventing human trafficking, underscores the need for greater awareness and engagement from health care professionals to stem the growing problem of adults and children working against their will. Human trafficking is a $150 billion global industry that robs 25 million people around the world of their freedom, the report notes. And while human trafficking may be more common in some parts of the world, it’s no less significant in the U.S. — as is the need for health care professionals to become more proactive in documenting known and suspected cases of human trafficking.

“It really comes down to a few issues such as general awareness and training,” says Brittany Anthony, strategic research manager at Polaris. “A lot of health care professionals either don’t seek out this information or don’t know where to find resources and training.”

Anthony says many health care providers still do not recognize the signs of human trafficking and can mistake it for other types of crime or attribute the victims’ behaviors to mental health issues.

This situation seems to be changing rapidly, however, notes the Polaris report. In 2014, the National Human Trafficking Hotline’s online training resource for health care professionals was viewed 340 times. In 2017, the same resource was viewed nearly 16,000 times. A 2017 article published by Medical Education Online notes that calls to the hotline by health care professionals rose more than 71 percent between 2012 and 2014. Meanwhile, the Polaris report states that more than 14 medical societies have created policies on trafficking and some states, including New York, are mandating training on human trafficking for health professionals.

The American Hospital Association (AHA) and its “Hospitals Against Violence” initiative have actively supported efforts to combat incidents of human trafficking and to document incidents of exploitation by compiling resources on its website to assist the field. Noting that the existing ICD-10 CM abuse codes fell short of differentiating human-trafficking victims from other abuse victims, the AHA joined CHI and Massachusetts General Hospital and other health care organizations in successfully advocating for the adoption of the first ICD-10-CM codes for classifying human-trafficking abuse.

Hospitals and health systems have a crucial role to play in identifying and assisting victims of human trafficking, noted Melinda Hatton, AHA general counsel. Securing these new codes will give all health professionals who come into contact with victims an important opportunity to provide compassion, which will lead to a better understanding of this scourge and more resources to combat it.

Documenting instances of suspected or confirmed human trafficking is critical to being able to pursue perpetrators, say prosecutors and law enforcement officials. They say health care professionals can be tremendous allies in this fight by being vigilant in recognizing potential victims and by developing a rapport with them when they present for treatment.

Being supportive and nonjudgmental when treating these patients is essential. Posting signs strategically in EDs, restrooms and other locations alerting trafficking victims whom they can call for help is another important step, and some states, such as Texas, now require posting these notices in health care facilities.

Polaris research indicates that a high percentage of trafficking victims will seek medical care at some point during their exploitation.

These statistics clearly point to the opportunities for well-trained professionals and team members to identify and support trafficking victims. The key is raising awareness among front-line caregivers and support staff and training them to identify and respond to victims. It’s a delicate situation for even the most seasoned health care professional. And, as the Polaris report illustrates, there are previous indications that health care professionals have struggled to recognize or act on suspicions that some patients may have been trafficking victims.

“One 2012 study found that only 6 percent of health care professionals reported treating a human-trafficking victim,” the Polaris report states.

Rachel D. Fischer, R.N., clinical lead and community outreach specialist for Harris County Forensic Nurse Examiners, isn’t surprised by these findings. She notes that when she presents programs on human trafficking to health care professionals, many are stunned to realize the scope of the problem.

The voice of experience

Fischer can empathize with ED nurses who are sometimes so busy they don’t get around to questions that might elicit information about whether the person is being exploited. As a sexual-assault nurse examiner, Fischer has the clinical training to gather documentation and education to help broach this sensitive subject. And she has one other thing few nurses have when it comes to building rapport with sex-trafficking victims: She is a survivor of sex-trafficking, which occurred when she was a teenager in Detroit.

“When we realize that these are human beings who are struggling and that they’re victims and they need our help, we will treat them much differently,” Fischer said. “But nurses are so busy, especially ED nurses. A lot more training needs to be done in this area.” Despite the challenges in identifying and properly assisting victims of human trafficking, organizations like the Houston Area Human Trafficking Health Care Consortium inspire Fischer. 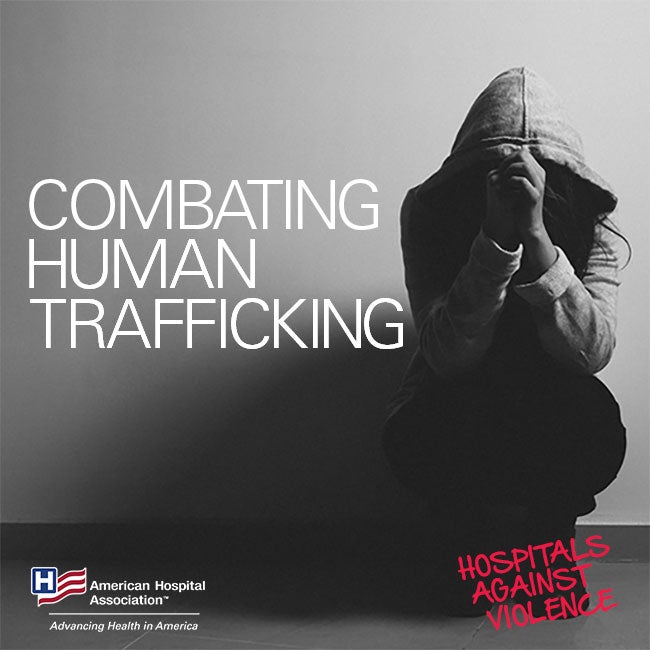