On Friday, December 10, 2021, the deadliest tornado outbreak on record, for the month of December, thundered across the southern United States, producing catastrophic damage. More than 15,000 buildings were destroyed. Up to 81 deaths including 24 in Graves County have been attributed to the surprising, late-season storm and the scene of a massive emergency response.

At. 9:26 p.m. CT, the National Weather Service issued a tornado emergency for Mayfield as the massive wedge tornado approached the town from the southwest. As the tornado entered the southwest side of Mayfield, it gained EF4 intensity. An EF4 tornado, characterized by wind speeds between 116 and 200 mph, is the second most intense on the Enhanced Fujita Scale. The strength, path, and duration of the December 10th event were also surprising. It was on the ground for nearly three hours; tracking 160 miles in total.

What was different about this experience was not only the ferocity of the storm, but the areas that were hit, were very rural. The violent, nighttime tornado rumbled across Western Kentucky, producing severe to catastrophic damage in numerous towns, including Cayce, Mayfield, Princeton, Dawson Springs, Bremen, and Bowling Green. There was widespread damage to communications infrastructure. Adding to the chaos, Graves County’s emergency medical services (EMS) headquarters, which doubles as the Mayfield Fire Department, was demolished by the tornado.

View the detailed study below. 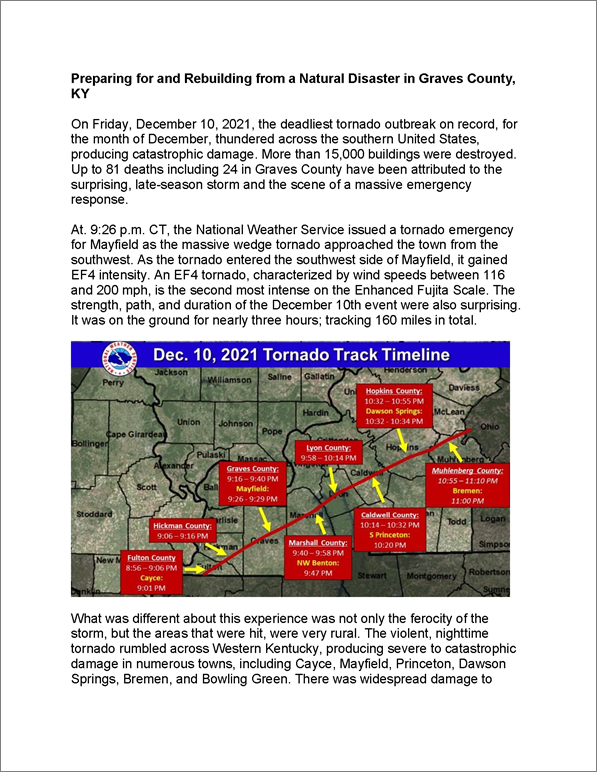